“A bird’s eye view that will both entertain and inform as to a side of Cuba rarely written about.”

“Lajas, my beloved corner, the place where I was born….” Moré, perhaps Cuba’s most beloved sonero, died young of cirrhosis shortly after the revolution.

Comparsa, played primarily during carnival season, is descended from a time when the slaves symbolically overran society in an annual blowing-off-of-steam, a cathartic breaking of enslavement that might forestall revolt. It is high-energy music played while marching around the town in an impromptu parade. Hooting, whistling, and dancing through the streets, a comparsa is an organic orchestra of beaten chunks of metal, homemade drums, and the odd battered old cornet or trombone. Passersby join in the revelry, swelling the ranks to a steaming, sweating critical mass of percussion.
Some variant of comparsa is still played in most places where there was a strong slave presence in the Americas. The marching steel bands of Trinidad, with their homemade oil-barrel pans, are comparable, as is samba in Brazil. In Haiti, the pre-Easter raras still demonstrate the original function of these parades, all but shutting down major roadways. The marching mob surrounds the gleaming, tinted-glass SUVs of the elite with a musical swarm, peering and leering in through the tightly rolled-up windows of the air-conditioned automobiles while beating out high-octane rhythms on instruments fashioned from rusty old car parts. There is an implied threat in the rara, and to march with one is to walk a fine edge between joyful abandon and violent chaos. Don’t push us too far, says the rara. This growing, flowing mass could turn ugly at any moment, and dismantle your Toyota Land Cruiser into so many more percussion instruments, as easily as a school of piranhas stripping the flesh off a cow. In Cuba, I never felt this aggressive edge when jogging behind a comparsa: it was more like family fun.

I met Dagoberto Manzo in Matanzas. He was sitting on a stool in front of his house, sanding the neck of an acoustic guitar. You can see the sawdust on the floor. As soon as I expressed an interest in music, he put that job down and rushed into the house to get one of his prize creations, a double-necked tres and acoustic guitar combo that he claimed is the only one of its kind in Cuba. 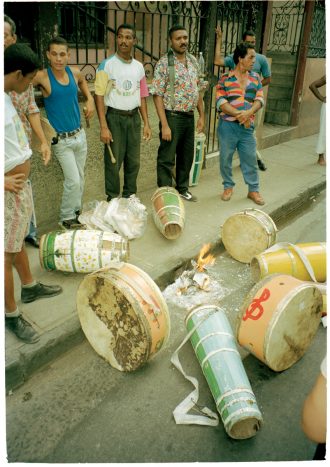 When I took this picture, I assumed this ensemble was performing a pre-march ritual, some sort of blessing of the drums, but I see now that this may have only been a romantic notion of my own invention. Their nonchalance, and the water running down the gutter, makes me wonder if these guys weren’t just tightening up the skins and drying  them off after getting caught in a rain shower.

In Cuba bicycles are used to carry just about any conceivable load. I saw masons riding with the sturdy Chinese back racks of their iron “Flying Pigeons” piled high with bricks, rural wood-gatherers with teetering loads of firewood, and one guy riding a bike with a wedding cake balanced on the handlebars. Mostly, they carried passengers, as many as three at a time, with the one on the back cocking his feet up to avoid the pedals, another sitting on the bars, and a third sitting side-saddle on the top-tube, between the rider’s legs.

About the Author
Richard Fleming is an inveterate traveler, photographer, amateur musicologist, sometime deejay, and self-described “rabid birdwatcher” long enamored of the music, culture, and wild places of the Greater Antilles. Since his graduation from Princeton University in 1987, his work as a sound recordist in documentary film has taken him to the farthest reaches of the globe. He’s been around the world with Kofi Annan, flown missions over Kandahar with the US army reserve, followed Imelda Marcos on the presidential campaign trail in the Philippines, camped with geologists in Antarctica, and sweltered on a nuclear aircraft carrier plying the waters of the Persian Gulf. When not on the road, he lives in Brooklyn, New York. Walking to Guantánamo is his first book.